Read this guide before using the device. The buyer is obligated to acquaint every FantasyHome 3D pen user with these instructions.

1) The 3D pen tip heats up to 235 °C! Do not touch it and do not bring it near flammable objects during and after working with the pen until it is completely cool.

2) For safe use of the 3D pen, use it only with the original environmentally friendly FantasyHome PLA filament – non-original materials can damage the 3D pen, in rare cases they can cause a fire.

4) Do not disassemble the 3D pen and/or its parts.

5) Children under the age of 14 may only use the device with adult supervision.

6) When you have finished working with the 3D pen, keep it out of the reach of children.

7) The device and its accessories are not edible.

How to get started? 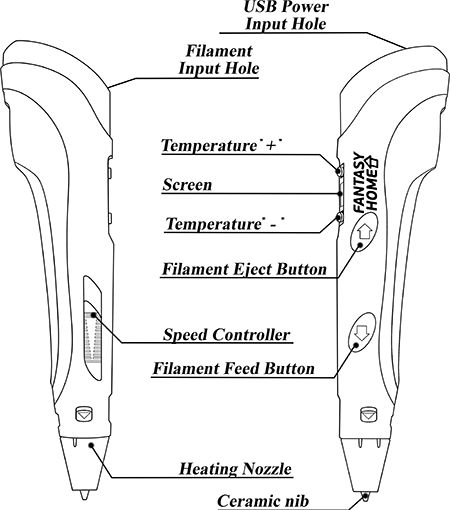 3D pens will consume about 10 meters of filament per hour, so if you don’t have a lot of filament, we recommend ordering it in advance. You can order here.

1) After use always unload the filament from the pen, so it would last longer.

2) Moisture can change the physical properties of the filament, so it is good practice to store your filament in a dry location.

3) Only use the original FantasyHome PLA filament intended for FantasyHome 3D pens. Materials from other manufacturers can have different densities, viscosities, melting and ignition points, which can chase the 3D pen to fail, and in the worst case, it can cause a fire or harm your health. You can order high-quality and original material on our website.

4) Do not allow the filament to be completely used, there must always be 1-2 cm outside of the 3D pen body for safe removal and replacement.

5) Always cut the filament at straight angles before replacing and loading the filament. This will prevent possible filament jams.

How and why to regulate the temperature of the 3D pen/filament? 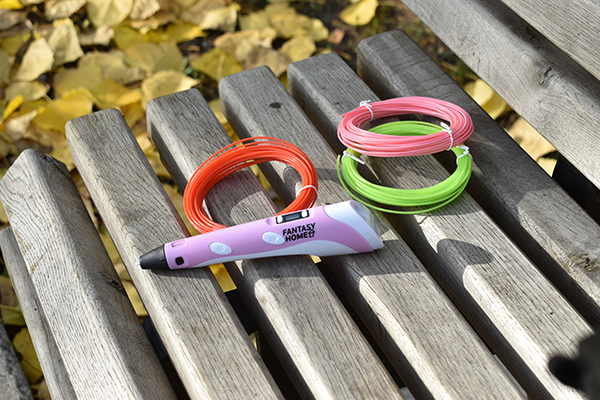 Correctly selected temperature is extremely important in 3D drawing, because not only does the solidification time of the filament and the appearance of the resulting drawing depend on it, but also its sturdiness.

The recommended temperature for working with high quality FantasyHome PLA filament is between 190 and 210 °C. The optimum temperature depends on the colour of the filament and some other factors:

It is recommended to set a lower temperature when drawing small details, because even slight deformation caused by high temperature will be noticeable on them. Lowering the temperature solves this problem.

For the plastic figures to cool faster, in the cold season some users draw with 3D pens on the street using a powerbank with the required current of 2A. For safety reason, this is only permitted in dry weather!

The pen speed is not adjustable. If the drawing speed does not change after adjusting the speed control button, please make sure that the temperature is high enough. Please notice, that the maximum speed is 37 per cent higher than the minimum speed (slide the speed control button towards you to increase the drawing speed). Because the difference is small, it can not always be seen visually. The 37 per cent speed difference is chosen deliberately because consumers usually don’t choose the higher speed. Also, higher speed increases the pressure in the 3D pen which leads to more frequent failures.

The motor cannot handle the filament feed. If, while working with the 3D pen, you hear sounds of the motor, which clearly indicate that the motor is having difficulty pushing the filament – increase the temperature of the 3D pen, the filament will become more liquid and it will be easier for the motor to push the filament through the nozzle.

The filament is stuck in the 3D pen. If you encounter this problem, connect the 3D pen to the power source and select the ABS mode. Preheat the pen to a maximum temperature of 235 °C. Using pliers, pull the filament until you pull it out. After that, set the standard temperature mod and try using the pen.

The filament cannot be inserted into the 3D pen. Try to insert it at a different angle.

The 3D pen does not heat up or turn on. Make sure that the device is connected to a 2-ampere power source. Almost all modern gadgets work at this current strength, so you can easily find a suitable power source. At lower amperage, the pen may not work correctly.

Filament flows out of the heated up 3D pen when I do not press the feed button. This is typical for all type of pens – the filament inside them is liquid and nothing holds it, so it flows out. To stop the filament from flowing out, you can lower its temperature or press the “back” button for a few seconds to move the filament away from the tip of the pen.

Strong unpleasant odour. If you use the original FantasyHome filament, try lowering its temperature, because it may be overheated. If you are using non-original filament, the smell may be due to the poor quality of the filament used, try using the original one. You can order high-quality and original material on our website.

We developed the product with the aim of providing our customers with a high-quality 3D pen, the production and use of which has a minimum impact on the environment. We decided not to use plastic packaging. Also, to save paper, we posted the instructions in electronic form. The 3D pen comes with FantasyHome PLA organic filament. It is important that the melting point of FantasyHome filament is lower than ABS, so less electricity is consumed to heat it up.

Dispose of the 3D pen properly.

The 3D pen and the power cord are electrical appliances, so dispose of them in accordance with local regulations – as a rule, electronics should be disposed of in their designated containers.

Security measures that we apply

In order to make working with the 3D pen safe, 4 security measures are integrated into our product:

Automatic shutdown. If the pen is left unattended, it will automatically shut down after 3 minutes.

Shutdown in case of damage to the device. If the nozzle is damaged during use, in most cases the 3D pen can detect this and stops heating automatically until the device is repaired.

Protection against burns. To almost eliminate the likelihood of burns, the white part of the nozzle of the 3D pen is made of ceramic. Ceramic has low thermal conductivity, therefore, with an accidental, short contact, burns usually do not appear. Please note that the nozzle of the pen is still very hot and burns are possible with a longer touch or if the skin is delicate – therefore, you must not touch the nozzle.

No harmful ABS filament. ABS filament is made from oil and when heated, it releases substances that are harmful to health into the air. FantasyHome PLA filament we supply does not contain petroleum products; it is made from corn. Please note that FantasyHome PLA is an improved version of regular PLA, we have improved it to be perfect for drawing FantasyHome 3D pens. Although PLA filament is environmentally friendly and barely has an odor, we strongly recommend to not breath in the smoke it emits and to use it only in a well-ventilated room. PLA is inedible.

If while working with a 3D pen you smell something unpleasant, hear a sound which is not typical for the pen and have a suspicion, that the pen or the wires have begun to burn, melt or spark, immediately safely disconnect the pen from the power source and place it on a non-combustible surface. If necessary, use protection for the hands, eyes and/or respiratory protection to avoid possible burns, electric shock or any other harm to health.

Such serious breakages have never happened to FantasyHome products. If they occur, users are obliged to follow these safety precautions. Quality guarantee only applies to the 3D pen itself and its components, FantasyHome is not responsible for any other material and non-material damage arising from the breakage of the 3D pen or its components.